There is just something about the Scott Pilgrim series that appeals to me- the seamless combination of early 20s slice of life and vintage video gaming tropes, the Canadiana, the effortless humor and geeky references that don’t feel too cloying. In cloaking the reality of its relationship and coming of age motifs in the mechanics and bizarre nature of video games and comics, Bryan Lee O’Malley seems to create a perfect satirical interpretation of life as a young adult during the late ‘90s, early ‘00s, steeped in a childish nostalgia but not neglecting some real feels.

Recently, I reread the series in the full color (or should I, writing of Canadians, spell it, “colour”?) edition and relished reading through them again. O’Malley’s writing really has an ear for funny, naturalistic dialogue and expertly dropped references, his art expressive and fun, if occasionally repetitive. While it can be difficult to tell some of the characters apart, women, in particular, this turns out to be less a problem in the full color version. The mix of frenetic action and familiar coming of age angst makes for an eminently enjoyable comic, and the vibrant colors of this edition make every Toronto landmark, cramped 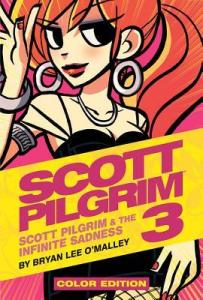 The story, on the other hand, did not feel nearly as great on the reread, though still charming and engrossing. Each volume in the series advances the saga of the thoughtless and nerdy Toronto manchild in a band, Scott Pilgrim, and his various acquaintances as they struggle with all of those post-college, grown up concerns (or just attempt to ignore them entirely). For Scott Pilgrim, at least, these concerns are melded seamlessly into a series of video game inspired motifs and as he begins dating the his literal dream girl, the American, Ramona Flowers, he has to deal with her baggage, a series of “evil exes,” all with their own axes to grind, as a 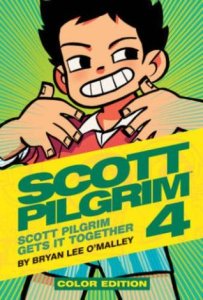 series of boss fights. If only it was so straight forward, eh? The supporting cast, from acerbic Kim Pine and hedonistic Wallace Wells, to the evil exes, were all delightful as well.

I felt it was pretty amazing how well everything in the series came together on my first reading, but the behind the scenes info I was interested to read included in this edition seem to suggest that most of it was accidental, and O’Malley’s creative process and development of the series and its characters seemed more happenstance than anything else. With so many characters appearing throughout the series, a

few of them seem relatively underdeveloped and some threads appear only to be dropped later, such as Scott’s high school friend Lisa Miller and various family members. In this case, I feel that the movie, Scott Pilgrim versus the World, might be the best depiction of the story, the cinematic version polishing up the rough edges into a self-contained, streamlined story and really capturing the audio, musical themes woven into it from the beginning as well. It is, I feel, 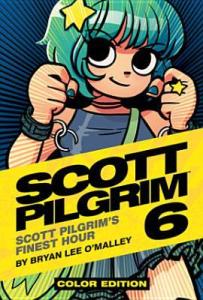 a perfect apotheosis of the material.

I'm a wandering librarian currently living in Minneapolis, learning new things every day. I enjoy tea, have dilettante's interest in writing, photography, and biking, and, of course, love books. View all posts by spoonbridge

This is a text widget. The Text Widget allows you to add text or HTML to your sidebar. You can use a text widget to display text, links, images, HTML, or a combination of these. Edit them in the Widget section of the Customizer.
%d bloggers like this: